Saturday 19th May - A headteacher's view
I decided to arrive well before the crowds to erect my tent following my tribulations last year. This did mean that I would be protected from prying eyes watching my frustrations (and blood blisters on my hands) grow. After an hour of struggling, I finally gained the upper hand having decided to read the instructions!
I was fortunate that soon after some of the 'cavalry' arrived and the process of setting up the hall could begin. By the 'magic' hour of 4 o' clock (the time for fellow campers to begin assembling their tents - see below) the hall was ready, the bingo cards were cut, the pens were in place and the quiz sheets were itching to be written upon. 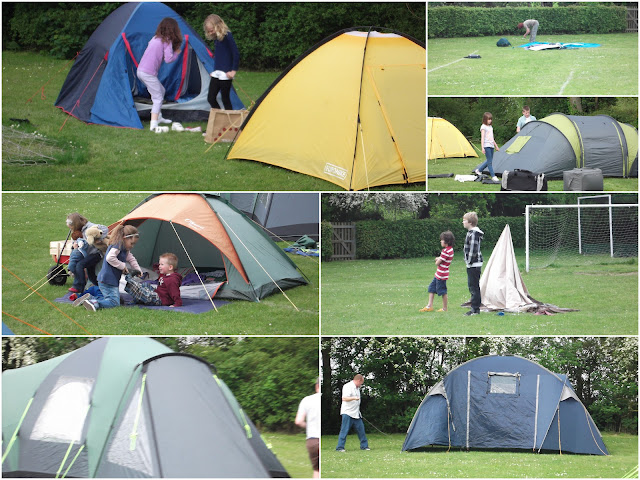 A rather professional looking barbecue quartet arrived a little unsure of whether the charcoal was of the correct grade to enable their cooking skills to be fully displayed. A quick trip to the garage rectified that, although this did mean we were a little behind schedule. However, a marvellous barbecue soon roared into life and soon the air was filled with the queueing masses using such terminology as, 'Can I have another, I've dropped mine?' 'Have you got any chicken?' 'How well done would you like yours?' and 'Make sure you save one (or two) for Mr Pearce.' 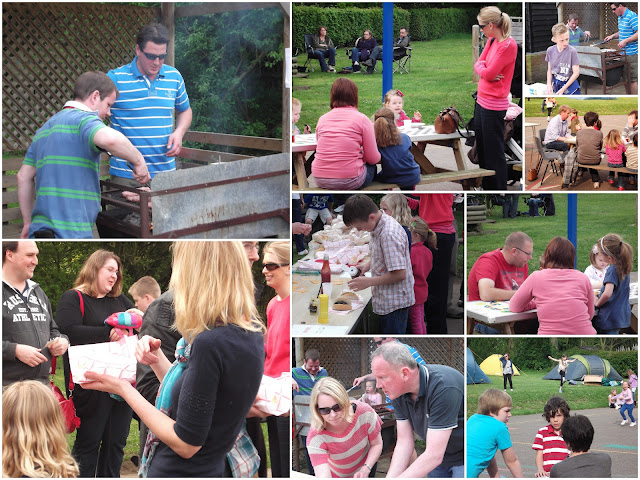 Then it was time for Family Bingo! The crowd were quite expectant as I fired the machine into life and tried to recall the correct bingo 'language' - unfortunately I think I visited the wrong website for that, so had to make some hasty changes.
After four rounds of bingo, the evening moved on to the Family Quiz. It was now 6.30pm and an eagerly anticipated burger (with onions) finally arrived. Gratefully received and devoured, it was now time to proceed with a challenging quiz with culminated with a picture round of 20 cartoon dogs. This was always going to decide the winners with Dum Dum (from Touche Turtle), Huckleberry Hound and Henry the Mild-Mannered Janitor (from Hong Kong Phooey) being the decisive answers. Well done to the winning team who fully deserved their hamper.
A short break and a change round in the hall (plus strawberries and cream, of which mine were mislaid) saw the start of our first film 'Puss in Boots'. This was followed by hot chocolate and cookies (mine were mislaid, again) and tehn our late night screening of 'Johnny English - Reborn'.
Plenty of laughs later, it was time for sleep. Well, not sleep, sort of being in a tent listening to lots of noise would better describe the next few hours. To be honest, not fully inflating my airbed didn't really help. There then followed some very funny moments which proceeded the dawn chorus (4.30am) and some children deciding at 5am that it was time for a game of football.
I dragged myself out of my tent at 6.30am to turn on the heating and water urn. Soon a group of fellow helpers keenly appeared as bacon rolls were made (then devoured) and dished out with lashings of hot tea and coffee.
Tents were gradually dismantled, cleaning commenced and things were looking good. In fact, we won't mention the bacon that was left in the oven, not after just one hour's sleep!
Seriously - a magnificent team effort with many people to thank for making such a successful event. Looking out on the playground last night made me feel very proud of our lovely school, everyone seemed so happy - thank you for all your support, hard work and dedication which enabled this to happen.
Time for a snooze!

Email ThisBlogThis!Share to TwitterShare to FacebookShare to Pinterest
Labels: PTFA