After a longer than expected coach journey, we finally arrived at How Hill at 11am. The 'Joy Rides' had done what they'd said on the packet, meaning that we were all in good spirits. 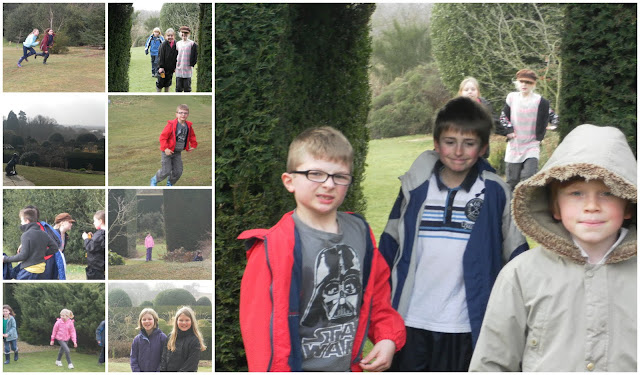 Having been allocated rooms and after various attempts at unpacking, lunch was taken.
The afternoon saw the children take part in two activities. First up was dyke dipping which resulted in muddy knees and trays full of all sorts of water life. Probably the most interesting were the caddis fly nymphs and a large leech. 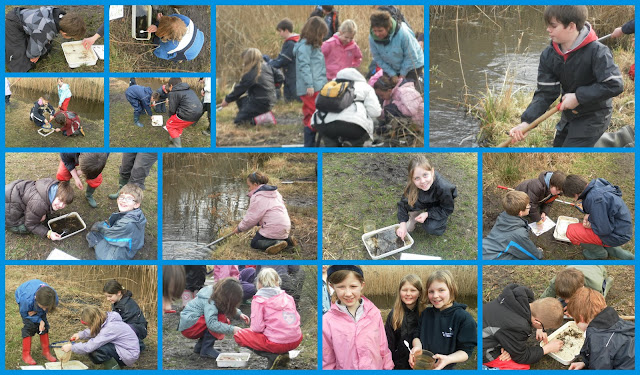 Next up, we were split into two groups for a nature walk where we saw three very different habitats: Dry Woodland, Wet Woodland and Marshland. It was amazing to see the differences in such a short area. It was also rather incredible to see how deep the mud was in places.

A lovely evening meal has just been taken and the children are settling down to weaving, diary writing and 'chillin'.
I am indebted to Harry N and William H for this - we've had a technological nightmare!
Posted by Unknown at 19:01 No comments: 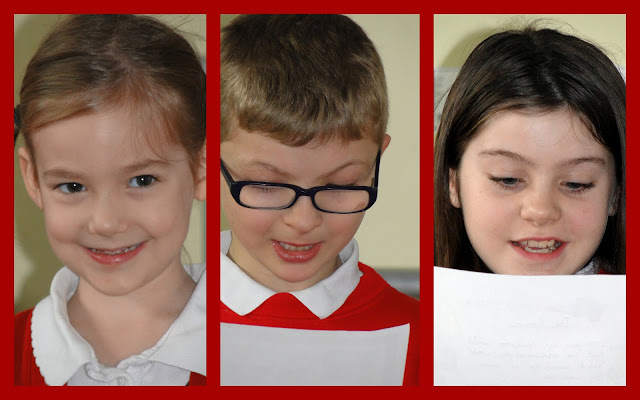 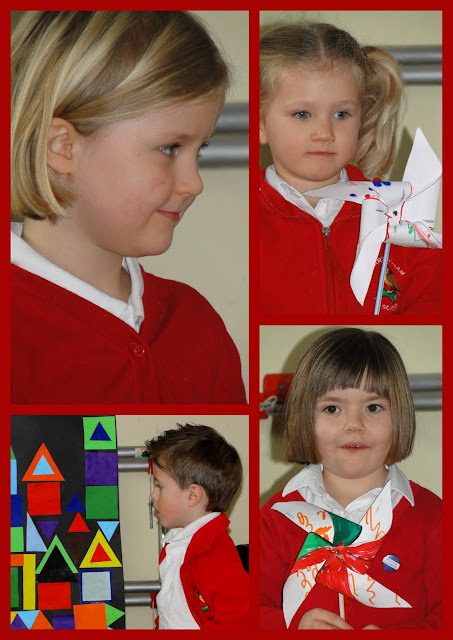 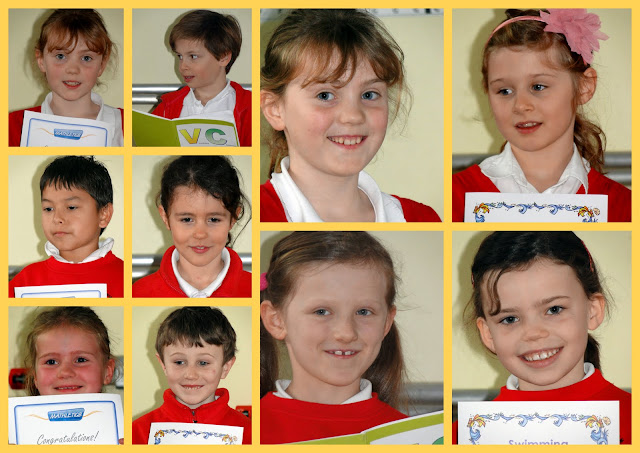 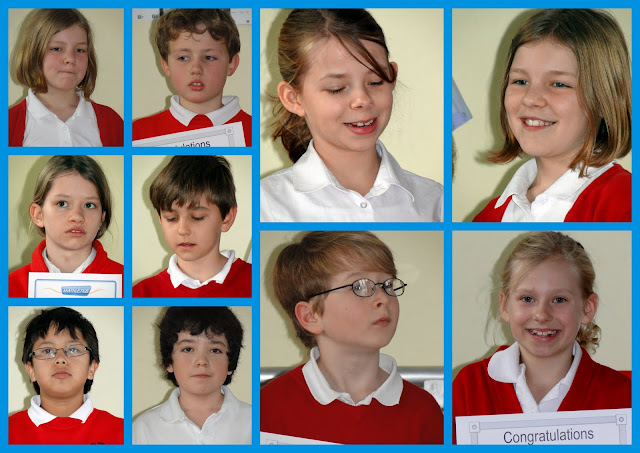 The two Earl Soham teams did themselves proud with a series of scintillating performances during this morning's basketball tournament. 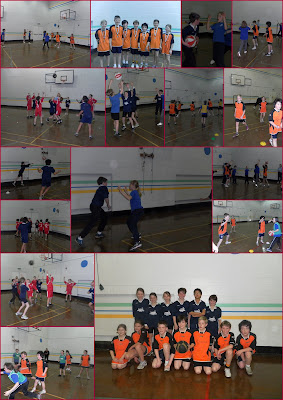 After a rather slow start, the points total started to steadily increase every time they stepped onto the court. With sweat running down their brows and smiles beaming from cheek to cheek, Earl Soham became more and more competitive, fluent and effective.
Roared on by a large contingent of their parents, the children simply revelled in the environment which saw them at their best. By this I mean that they took a few early knocks in the opening games, but dusted themselves down, rolled their sleeves up, learnt from their experiences and flourished.
Our two teams did magnificently well to finish 3rd and 4th. To be honest, on the way back to school it felt like we'd won. I'm very proud of all 13 of you!
Posted by Karl Pearce at 12:56 1 comment:

The following feature film was produced as part of a homework project during our topic on the Romans. I thought it was a fantastic piece of work and wanted to share it with everyone. Please leave a comment for the Year 5 boy who produced it. I'm sure he will be thrilled to hear what you have to say about his work.

This morning we gave a performance of the African Drumming piece we have been learning. Unfortunately we cannot display the video online, but we are able to provide an audio track in case you were unable to be at the performance. If you would like to watch the video, please speak to Mr Mansell.


Many thanks to Mrs Livermore for her excellent tuition over the last five weeks. We feel privileged to have taken part in this and hope to see her back again next year.
Posted by Unknown at 22:04 3 comments:

On Thursday we celebrated the culmination of our half-term's work on Romans in Blue Class, and Greeks in Yellow Class, with an activity day, in which the children were invited to dress as an Ancient Roman or Greek.

In the morning in Blue Class, we prepared a range of Roman recipes which were taken from the E2BN Cookit! website's History Cookbook. We worked in groups to produce a range of foods (most of which seemed to contain honey) including Bean and Chickpea Salad, Dates Alexandrine, Cucumeres, Tiger Nut Sweets and Honey Cake. 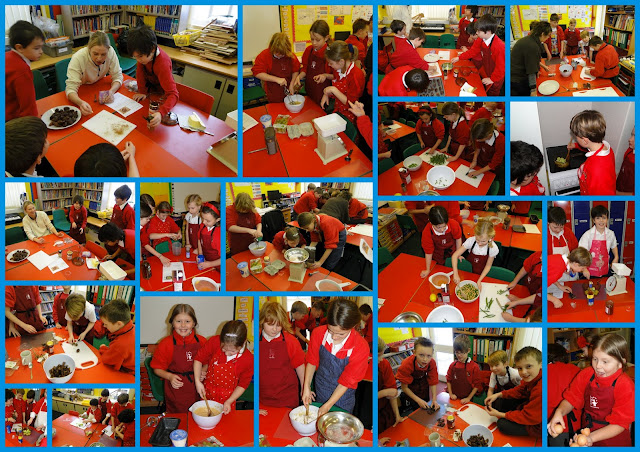 In the afternoon, we dressed up and took in in turns to be slaves, handing around the food to our wealthy masters and mistresses, who were lounging on the floor in true Roman style. 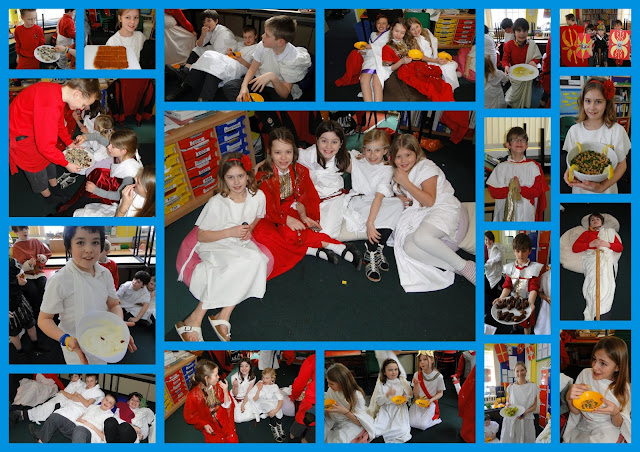 The banquet was followed by some Gladiatorial bouts using the shields, swords and armour that many of us had made for homework (with strict instructions not to actually cause each other any bodily injuries!) 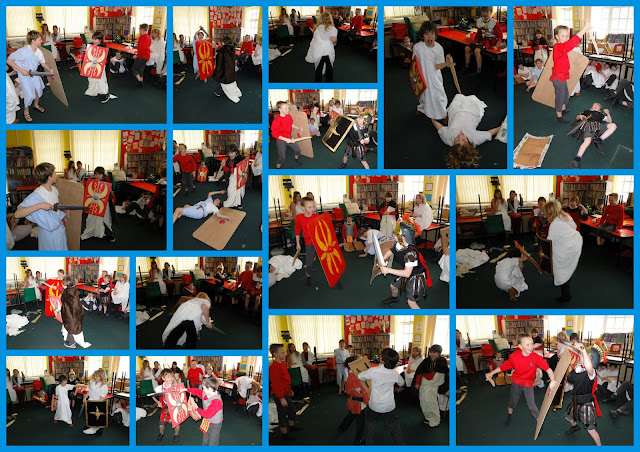 With adrenaline pumping we then set off to the hall where it was finally time to test the trebuchets we had been building in groups. Our target was the fort we produced last week, the ultimate test against marauding hordes! 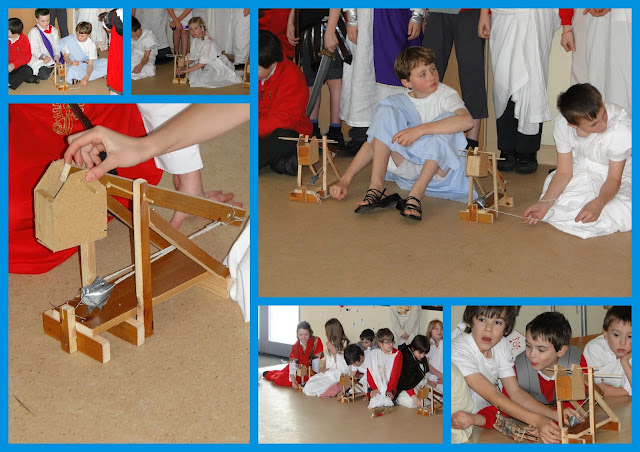 We were then treated to some Greek Tragedies: a collection of short plays based on Greek myths, performed by Yellow Class. 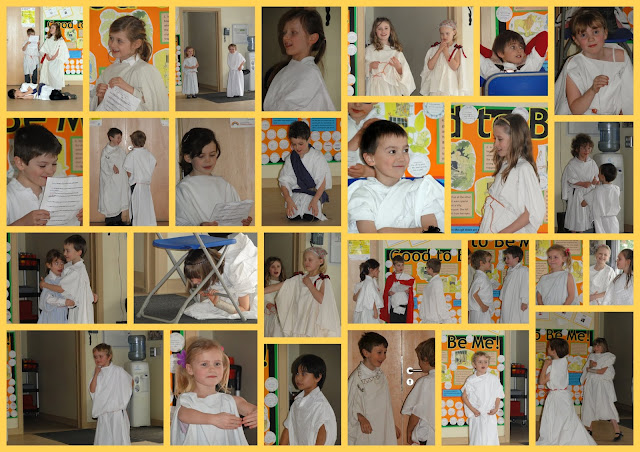 Thank you to all the parents who produced the lovely costumes to make this such a special day. We had a fantastic time! 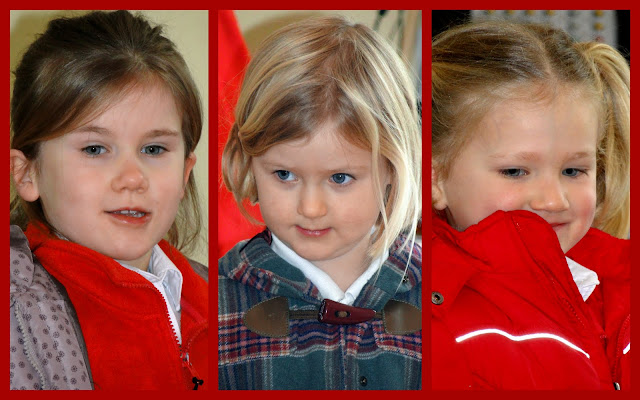 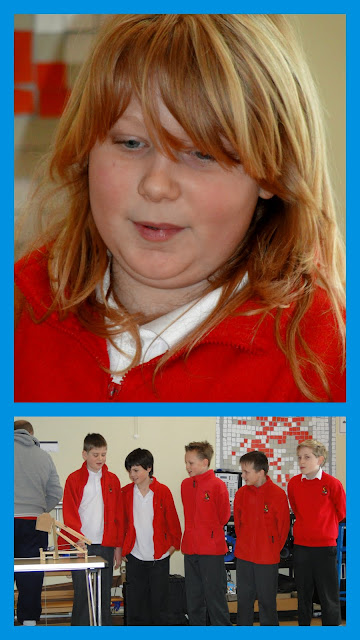 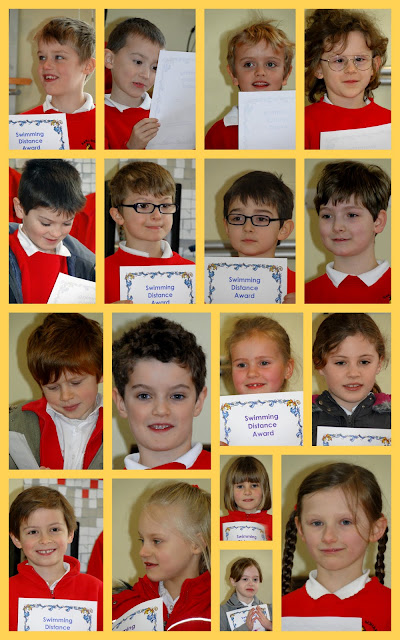 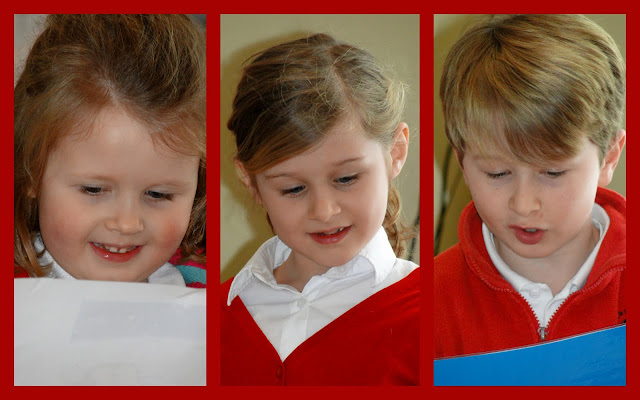 Today was Safer Internet Day, and we held a SHARE morning to which parents were invited to find out how we teach E-Safety in school.

We began the session by watching this video produced in 2009 to outline the reasons why we teach ICT in schools.

This was followed by a session in which we discussed our online activities. We watched a video about the five SMART rules:


Then the children and adults discussed a range of scenarios and how they would react in each situation. 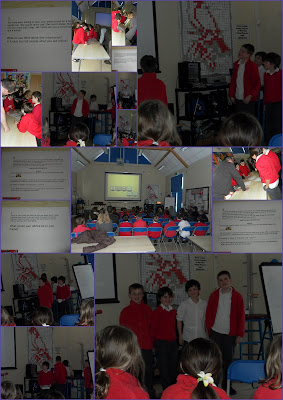 Finally, our digital leaders gave a brief presentation to sum up what we had learnt during the course of the morning.

Thank you to the parents who came. I hope you enjoyed the morning. If you have any further questions about how we teach e-safety, please don't hesitate to contact the school or for more information on keeping your children safe online, visit www.thinkuknow.co.uk/parents
Posted by Karl Pearce at 20:03 No comments:

The Fun Side of Snow

Following on from the difficulties caused this morning by the snow, the children were really able to enjoy themselves at playtime. 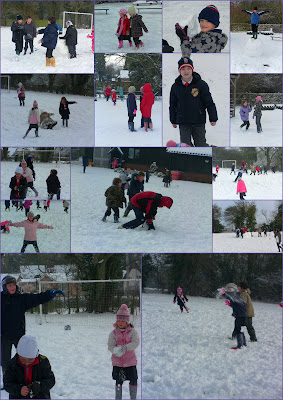 The children returned to class with rosy cheeks and beaming smiles, whilst the staff licked their wounds and removed snow from their ears!
It looks like the snow may linger for some time, so stay prepared!
Posted by Karl Pearce at 11:31 2 comments:

Email ThisBlogThis!Share to TwitterShare to FacebookShare to Pinterest
Labels: Snow

The school will be open today. However, we will be keeping registers open until 10am to allow for the expected extra time it may take to get to school this morning.
A pathway has been cleared, but, the car park is untreated. At the moment, my car is blocking the entrance as I'm stuck! The approach road to the school is rather difficult at the moment.
Please travel carefully. 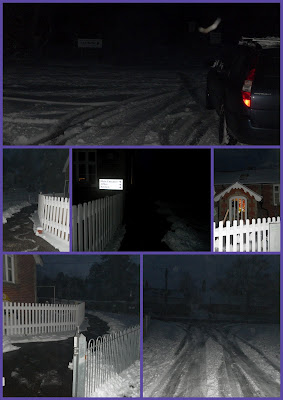 
In our VCOP sessions this week we have been writing about Boudicca. The children started with three simple sentences, without any punctuation:

During the week the children focused on a different element of writing each day:


Here are two of the resulting pieces of writing, which I think are just fantastic.

Boudicca greatly desired revenge, and she longed for it more than life itself. This was because, when the Romans came to collect the taxes that the Iceni were paying, Boudicca refused. Violently, they assaulted her daughters, and whipped and beat her until her tribe paid the taxes. However, although she was a fierce and powerful woman, I believe she was probably one of the greatest of the few Celtic queens.

Soon after, she created a strong army of Celtic soldiers and warriors, carefully selected from the Iceni tribe, of which Boudicca was queen. She became queen after her husband (Prasutagus) died from an unknown illness. Eventually, they started heading towards three of the many major Roman cities: Camolodunum, Londinium, and Verulamium, seeking   violent revenge every step of the way...

But, unfortunately, when they were marching, they met a legion of Roman soldiers. Seeing that her army were greatly outnumbered, Boudicca drank deadly poison to avoid suffering the pain that the Romans would inflict upon her.


After the sad death of Prasutagus (Boudicca’s husband) Boudicca refused to pay the taxes to the Romans. Boudicca got humiliated in front of her tribe, so she demanded a violent revenge on the Roman army.

Insulted, she recruited an army of powerful Celtic warriors to vanquish the Roman foe.

Fearsomely, they marched on the following cities: Camulodunom, Londinium and Veralamium (also know as Colchester, London and St Albans).

Boudicca’s reign of terror ended when her diminished army met a large legion of Roman soldiers. She knew that she would be beaten, so she killed herself by drinking some deadly poison meaning that the Romans wouldn't have the pleasure of killing her.

By William
Posted by Anonymous at 20:18 2 comments: 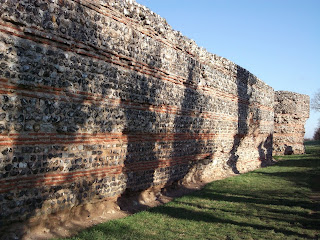 Over the last three weeks, we have been busy in Blue Class building our own Roman fort, based on Garrianonum (Burgh Castle) which we visited earlier in January.

First we studied the construction of the walls at Garrianonum, and produced designs of flint and tile on polystyrene, which we used to print a pattern for the walls of the fort. 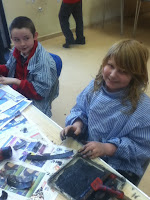 We then cut out and folded the nets which Mr Mansell had designed to build the walls and turrets. Making the corners was quite tricky.

We each produced a building from a net, adding our own decoration based on research from books about the Romans. We made barracks for the soldiers to sleep and train in, granaries to store their food, and forums where they could meet and hold discussions and debates. 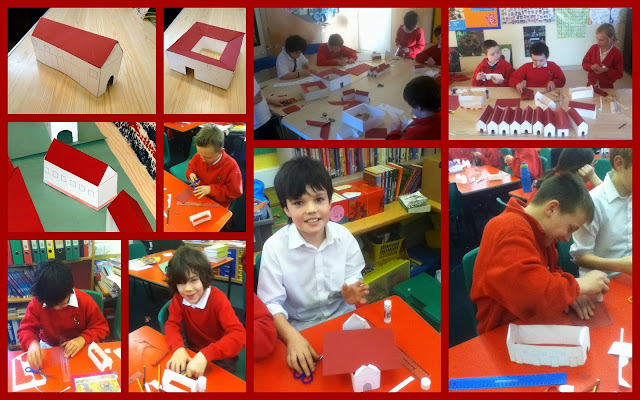 On Thursday afternoon we worked together to put all the pieces of wall together and planned the layout of the interior of the fort, using books to help us. 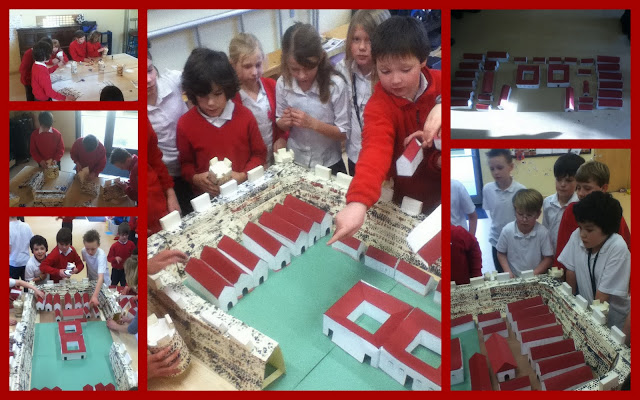 We hope you like our finished fort. Our plan for next week is to complete the trebuchets we are making and test them against our fort! I wonder which will be the strongest? 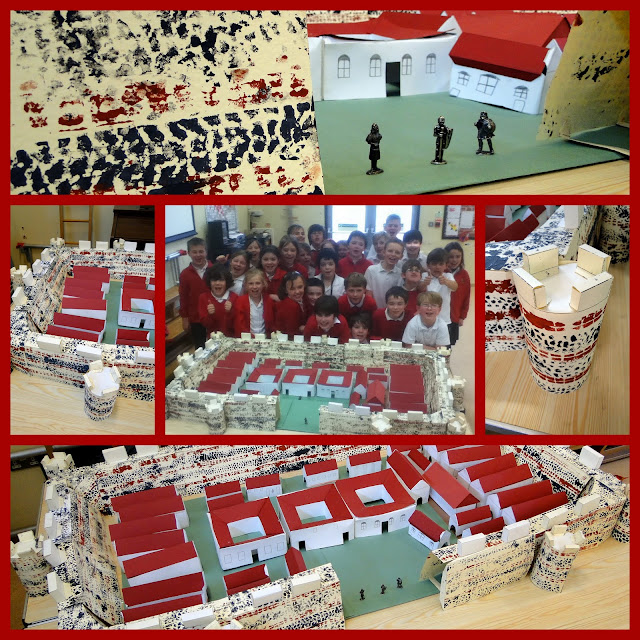 If anyone would like to build their own Roman Fort and would like to use the nets, please contact me - I would be happy to share the plans. jamesmansell@earlsoham.suffolk.sch.uk
Posted by Unknown at 16:50 No comments: 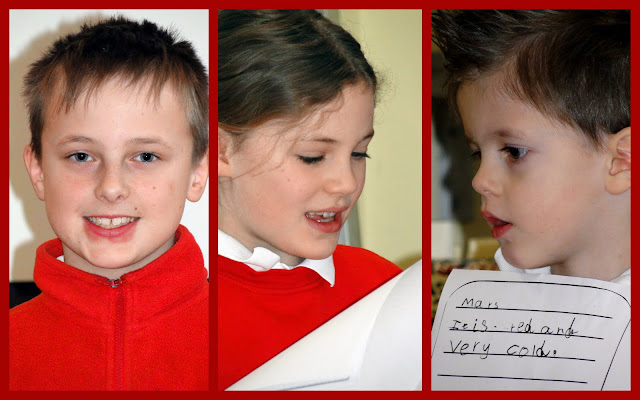 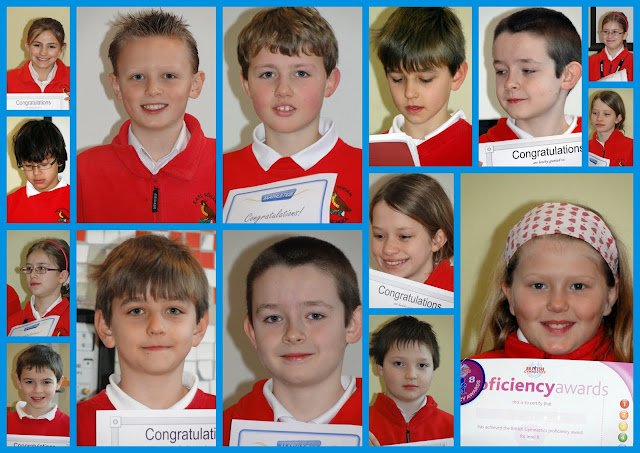 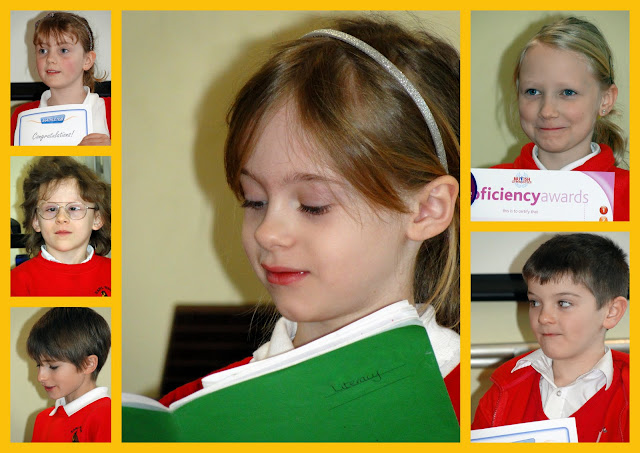 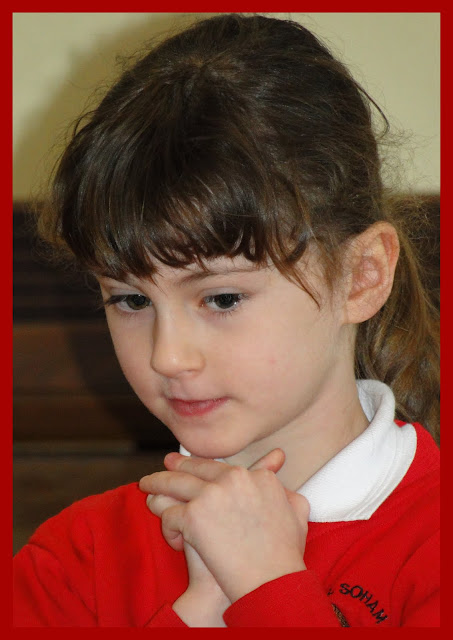 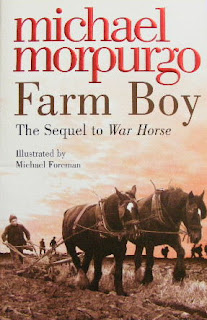 This book review was written by Miriam.

At the moment I am reading a book called Farm Boy; the sequel of War Horse. It is a cracking book about a young boy and his grandfather, who meet every holiday on the farm. The grandfather has a big secret, but will not tell the boy. This book was written by one of Britain's best-loved children’s writers, Michael Morpurgo, who has also written Born to Run, Alone on a Wide Wide Sea, The Dancing Bear, Dear Olly and many more.

I would recommend these books for children 8 - and over. I give this book 5 out of 5 stars. I am only on page 54 - not even half way, but it is already really exciting!

by Miriam
Posted by Unknown at 20:50 No comments: