The morning of Tuesday 23rd November 2010 seemed like any other morning, but all was not well at Earl Soham Primary School, as headteacher, Mr Pearce, discovered when he made his routine tour of duty.

Mr Pearce arrived at school as normal at 7:15 on Tuesday morning, but when he carried out his usual site safety inspection, he discovered something very strange indeed. In the centre circle of the meadow, lay a peach. An unusual enough find for a November morning, but, even odder, alongside it lay a message, a note which read "Super-size me!" and a pot of magic dust. 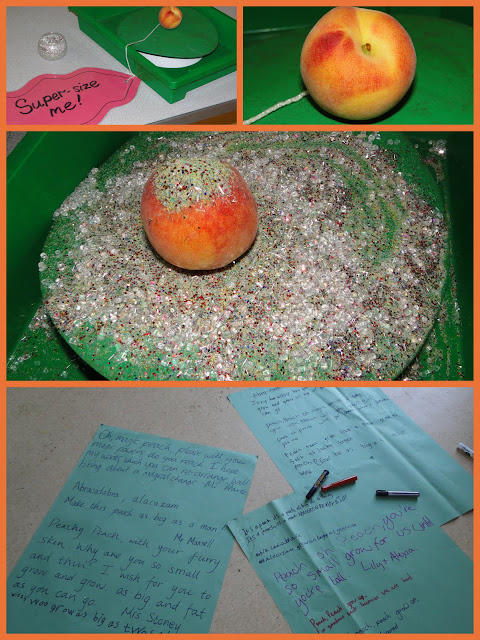 The message invited pupils to write a magic spell and sprinkle it with magic dust to make the peach grow.
When the children arrived the magic truly began, with children chanting magic spells and pouring on the glittery dust, but alas, it seemed, to no avail. A further four peaches were discovered on the field, all smaller than the first, and without the message and note. The 'magic' peach remained obstinately peach-sized and the children shuffled off to registration confused and disappointed.
However, a surprise awaited them when they returned for assembly just a few minutes later. The magic had worked! The once-small peach now towered above the tallest children, dwarfing even Mr Pearce with its enormity. 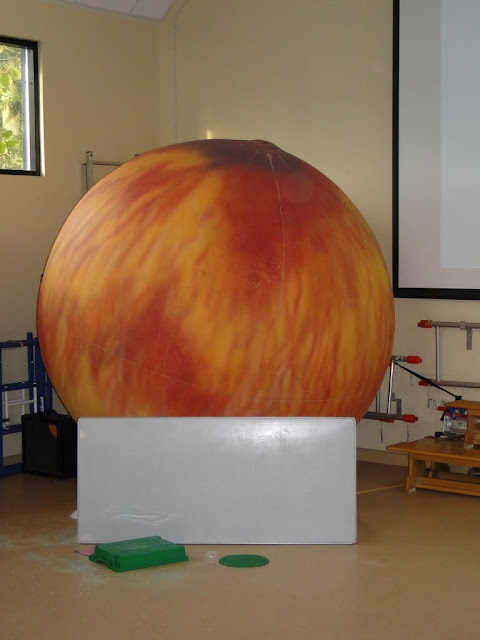 In assembly it came to light that Mrs Barker had been given some very bizarre-looking 'seeds' from a stranger at the gate the previous Friday. She had shown them to Mrs Exton, who, despite the red and green colour of the seeds, thought they were a variety of pumpkin and suggested that they be planted in the conservation area. Mr Mansell, who was on playground duty at the time, offered to take a handful of them up and plant them, but was shocked when halfway across the meadow the weird seeds began to wriggle in his hand. In fact, so shocked was he that he dropped the seeds, which quickly wriggled away into the soil, and no amount of digging could retrieve them.
Mrs Barker, upon hearing Mr Mansell's (rather girly) squeals, quickly threw the remaining seeds into the hedge and thinking no more of it, both left for the weekend, unaware of the potential consequences of their actions.
After assembly, the children were eager to return to their classrooms where excited discussions took place about where the peach had come from, why it wanted to be super-sized, and what may be inside it.
Mr Pearce began complaining of itchy, tingly fingers, so when the children in blue class began investigating one of the smaller peaches that was found, they took no chances and Mr Mansell wore gloves. 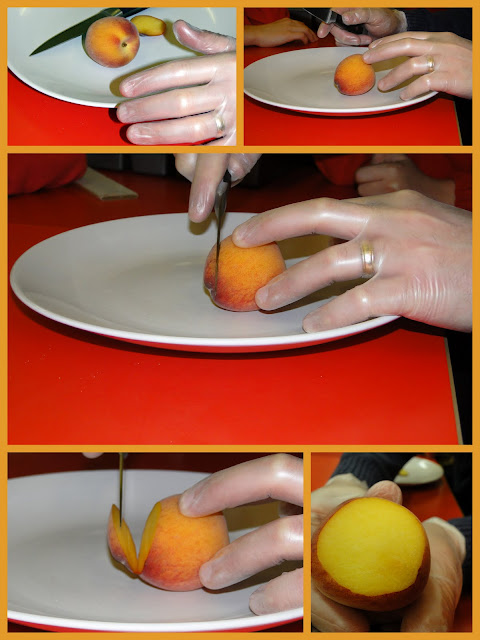 The small peach, upon close inspection appeared to contain a tunnel, which on a larger scale would be big enough to house a sizeable creature. This sparked further discussion about what kind of creature might be living inside and the children produced fact-files about the creatures they imagined to be residing within.
Worrying Developments
Around breaktime, there were a series of worrying developments.
Firstly came the discovery of large green footprints leading away from the peach and over the hedge where the remaining 'seeds' had been thrown. Yet, even the nature of the seeds was now put into doubt, as it appeared that these so-called seeds had hatched. Could they possibly be eggs instead of seeds? Only time will tell.
The second discovery was of worm-like creatures wriggling out of the tunnels in the small dissected peach. They were thankfully contained and appeared to stop moving once they had left the peach. It is still unknown what they were.
Despite his careful handling of the peach, Mr Mansell soon erupted in spots which oozed copious amounts of pus. 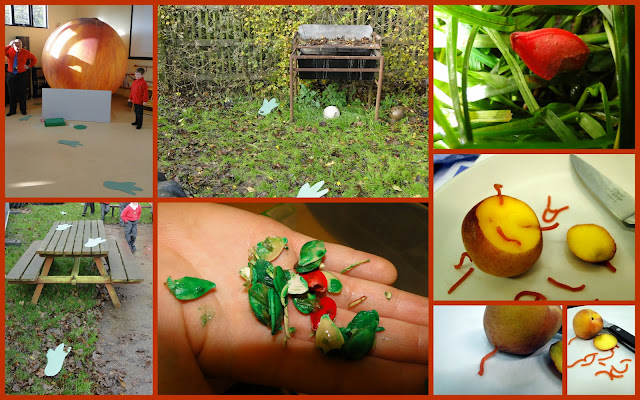 Blue class spent the rest of the morning and much of the afternoon planning and writing a newspaper report about the arrival of the peach.
A further development at lunchtime saw a second set of footprints, much smaller than the first and with more toes, leaving the peach and exiting through the hall window.
Midnight Snack
It seems that this second creature was not content to remain outside however, as when Mr Pearce opened up the school this morning a new scene of devastation greeted him. A window had been forced open, and a trail of half-eaten food and some sort of gooey substance coated the route from the hedge, back to the giant peach.
The area was quickly cordoned off and Mr Pearce sought advice from the Department of Health. Thankfully, he received a quick response from Dr Cillit Bang, urging caution, but giving the headteacher discretionary powers to grant pupils access to the restricted zone.
The children in blue class wrote letters of application asking for permission to investigate the unknown liquid substance covering the hall floor. Permission was granted to all on condition that appropriate protective clothing was worn. 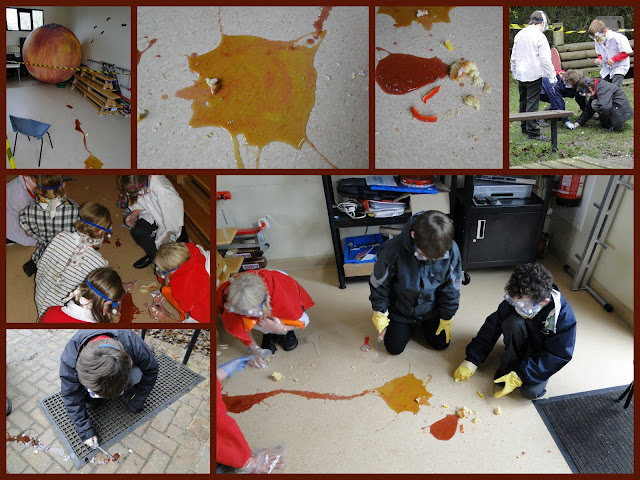 The children took on the role of forensic scientists, collecting evidence in Petri dishes and sample bags to return to the laboratory for analysis.
In the intervening period, and in a moment of what can only be described as sheer stupidity, Mr Pearce decided to taste some of the unknown gloop to try and find out what it was. He very quickly became ill and was seen frothing green at the mouth. He also developed large green spots over his head.
Just in time, a fax from the Department of Health advised that the symptoms could be relieved by immersing his head in cold water, a remedy which was quickly applied. 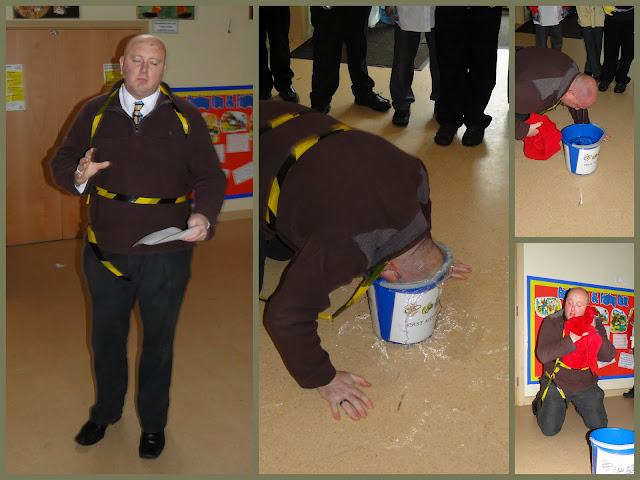 Following lunch, a range of experiments was devised to ascertain the nature of the gloop. One team investigated whether the substance could be dissolved and found that it would dissolve in hot water. A second team worked with an adult to see whether it could be burnt. A third group used microscopes to examine the microscopic structure and a fourth group heated the substance to determine whether it would melt. 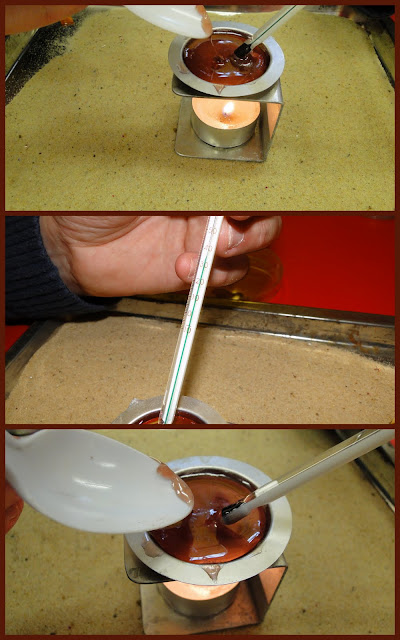 This fourth experiment was deemed the most useful as it gave us valuable information about the nature of the creature. The children concluded that the gloop, which was in a solid, jelly-like form, at room temperature, must have been liquid when it hit the ground, and therefore came from inside the creature, whose body temperature had to be between 32 degrees (the temperature at the which the substance melted) and 94 degrees (the temperature at which it boiled).
Examining all the evidence the class concluded that the creature's normal diet was the peach flesh, but being trapped outside the hall over night, it had raided the kitchen and tried to consume human food. This had disagreed with its digestive system and had been regurgitated when it finally managed to break back into the hall.
Whatever Next?
No one is sure what tomorrow will bring, but everyone hopes that the creature will reveal itself and solve some of the remaining puzzles, such as:
Posted by Unknown at 21:53