This morning in assembly, we looked at the Muslim festival of Eid-ul-Adha. This is also known as the 'Festival of Sacrifice' and marks the end of the Hajj. The Hajj is the pilgrimage to Makkah which is the fifth pillar of Islam and therefore a very important part of the Islamic faith. 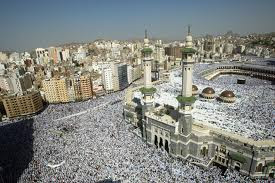 The Kaaba in Makkah during the Hajj

The festival of Eid-ul-Adha celebrates the occasion when Allah appeared to Ibrahim in a dream and asked him to sacrifice his son, Ishmael, as an act of obedience. The devil tried to tempt Ibrahim by saying he should disobey Allah and spare his son. As Ibrahim was about to kill his son, Allah stopped him and gave him a lamb to sacrifice instead.
Today, Muslims all over the world sacrifice a sheep (sometimes a goat) as a reminder in Ibrahim's obedience to Allah. The meat is shared out among family, friends and the poor. Muslims also go to a mosque for prayers, dressed in their best clothes. Muslims also give money to charity to help poor people buy new clothes and food so that they can also celebrate.