During this morning's assembly Blue Class received a direct hit in an air raid. So unexpected was the raid that the sirens failed to sound and Mr Mansell was caught by the blast and knocked unconscious.

A scene of devastation met the children's eyes as they returned to the classroom, expecting to start their literacy lesson. Much of the outside of the building was damaged, with bricks strewn across the ground, making entry to the classroom difficult. Inside the room, tables and chairs had been thrown around by the blast.
Thankfully the teaching assistants quickly took charge of the situation and kept everyone calm. When Mr Mansell finally came round, and the gash on his head was cleaned up, the job of tidying up the mess began.
"We were very lucky really," remarked Mr Pearce (headteacher). "The damage was all superficial and nobody was seriously injured. The children were very sensible and remained relatively calm in the circumstances."
Mrs Lander, a qualified first-aider, who was amongst the first on the scene, told us, "Mr Mansell bravely soldiered on in the true British spirit, despite receiving a nasty head wound." 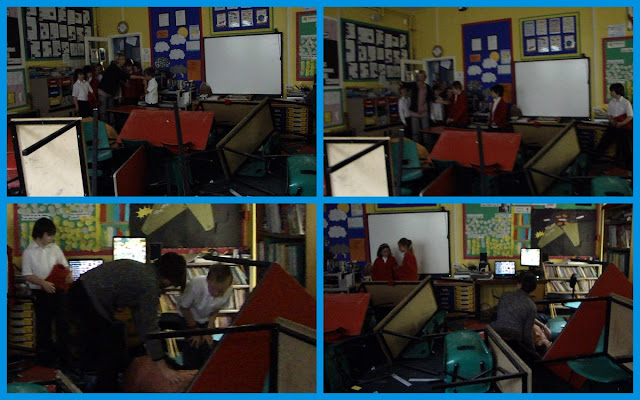 In spite of the damage and mess that the blast caused, everyone involved was determined not to let their spirits flag.

"If Hitler thinks sending his bombers over here will make us surrender he's another thing coming," said Mr Mansell. "He'll have to do better than that!"
Posted by Unknown at 19:27