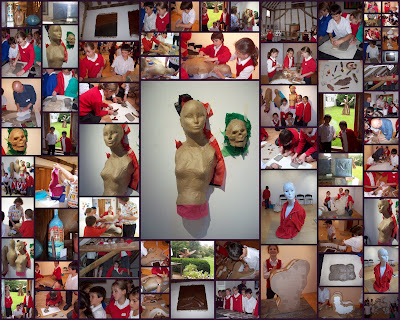 Five children from Upper Key Stage 2 spent a fantastic day, alongside their peers from other Debenham pyramid schools, taking part in a wide range of art activities at Wingfield Barns. This was the first of three planned sessions over the course of the year.
The children looked at the fantastic sculptures of Fred Watson, Carol Hodgson and Michael Lyons all on show in and around the centre. They used these as a stimulus for their work for the rest of the day.
Children worked in their school groups, creating 3D shapes by using tissue paper and brown gummed tape. This was carefully moulded around a particular shape or form. Whilst these were drying, the children moved outside, collecting items from the environment. These were then used to imprint on clay which was then used as a mould for plaster. The effects were fantastic!
The children then went back to working on their models and created some more 3D pieces to take home.
Posted by Karl Pearce at 19:26

Email ThisBlogThis!Share to TwitterShare to FacebookShare to Pinterest
Labels: Gifted and Talented