This morning the rounders team set off to Thomas Mills High School for the annual small schools rounders tournament. There were a total of 15 teams taking part, but we faced four in our group. In the first game we played Worlingworth, who were good batters and quickly scored several rounders, despite some excellent fielding from Earl Soham. However, Worlingworth's fielding was not as good as ours and that enabled us to come back with several rounders of our own. It was a close run match, but their big hits won them the game by one rounder.

Next up, we faced Gislingham. We were now working well as a team and won convincingly 13-1. During this match, the sky turned dark and it began to rain. It seemed at first like a light shower, but the rain was persistent. 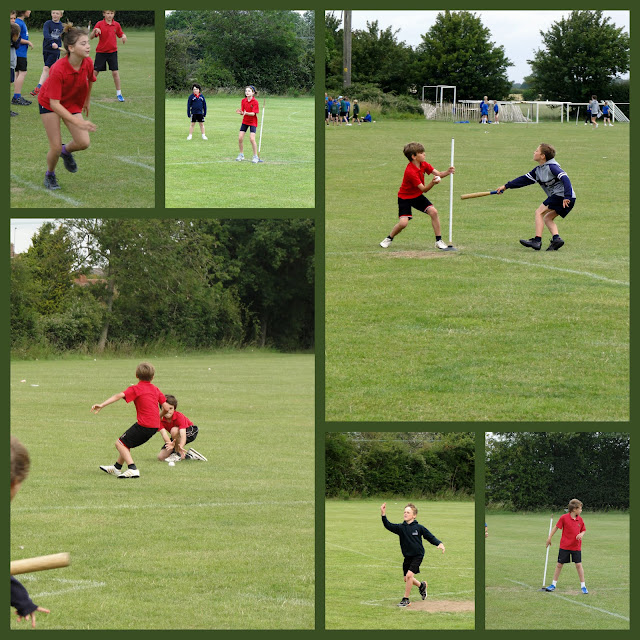 Our third match was more close run against Wortham, but we maintained our winning streak, despite the wet conditions and a chill wind making extremities cold: not good when trying to catch a rounders ball!

By this point, everyone was soaked through and there was talk of calling off the whole event. But the team had the taste of victory and wanted more.

Our final match was against Stoke Ash. For the first time, we were in bat first. After a shaky start on their part, the Stoke Ash team starting playing tactically. Realising that we were getting through to their second base to score, they put their best catcher there which caused us a few problems. However, some excellent batting saw some superb rounders.

The rain was unrelenting, and our spirits flagging as we started our fielding stint. The cold began to get to us and we started making mistakes. But the team did not give in; they supported one another, calling out encouragement to team-mates and our resolve returned. We got into a good rhythm and finally won the match.

The bad weather meant that a number of the teams had already left by this point, so there could be no semi-finals or finals. However, the scores were given for the groups and I am delighted to say we came first in our group!

Their win was thoroughly deserved. The children played brilliantly as a team and made me very proud. Well done to you all.
Posted by Unknown at 19:43