It's a Slippery Slope!

Blue Class made the most of the fantastic weather, and the fact that many children were currently away having an 'African adventure', by taking part in a watery team challenge.

Split into two teams of mixed ages, the task was simple - fill a bucket with the watery contents of a large container at the other side of the field. Sounds simple enough? Well, er, no actually. Each team were not allowed to touch the grass at any stage. They only had 3 cups, two very small mats, a large mat and 2 planks of wood to transport the water from one side to another. Combined, these were nowhere near long enough to reach the bucket! 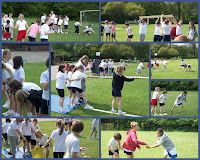 A fair bit of consultation and aborted attempts were required before tiny amounts of water gradually appeared in the buckets.
Posted by Karl Pearce at 17:40