Today in assembly we looked at the Jewish festival of Sukkot. Sukkot commemorates the years that the Jews spent in the desert after their escape from Egypt. Some lived in tents whilst others built huts out of leaves and branches. These huts were called sukkot (plural).

During the festival, some Jews build their own sukkah (singular) in the garden or at the synagogue. Jews eat their meals in the sukkah for the eight or nine days of the festival. They will also talk, sing, tell stories and even sleep in the sukkah. The sukkah can be nicely decorated with candles and fruit and some people even hang pictures and decorations on the walls.

There are rules to maki 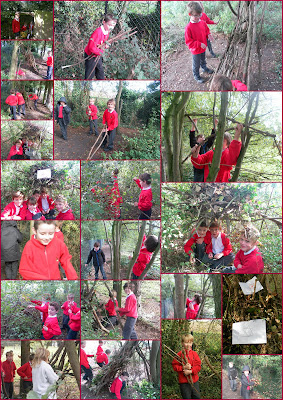 ng the sukkah. Each sukkah must have at least three walls. The roof of the sukkah must be made of material referred to as sekhakh, which means "covering." The 'covering' must be something that grew from the ground and was cut off, such as tree branches, corn stalks, bamboo reeds or sticks. Sekhakh (the roof covering) should be sparse and left loose enough so that the stars can be seen.

There is a special Sukkot service in the synagogue. Everyone holds branches from three trees in their hands and a citron fruit in their right. They walk around the synagogue seven times, waving the branches.Sukkot is similar to the Christian festival of Harvest, where people thank God for looking after them.

During break and lunch time, some children decided to make their own sukkah...