With a handful of Earl Sohamites taking advantage of the reduced admission prices for school groups, added to the recent good form of the 'Tractor Boys', spirits in the South Stand were quite high.
With weather more suited to cricket than football, the pitch was in need of much watering. In fact it reminded me of my own back garden in many ways, apart from the fact that there's not a mad long-haired lurcher 'scrabbing' it all up, neither is there a 9 year old whizzing around on her cycle speedway bike, a privet hedge or a large swing. In fact, that is probably one of the worst comparisons ever, but the heat can do funny things to a person's thinking! 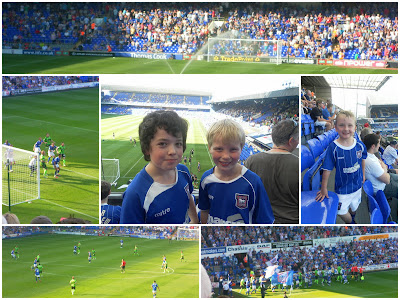 Brighton brought along a vociferous following who were clearly enjoying their day 'up North' as they described it. The early exchanges on the pitch were certainly more favourable to the home side, although the visitors were probably ahead in the singing stakes with their range of witty melodies. Half time saw the two teams return to the dressing rooms with the score exactly the same as it had been 45minutes previously.
The visitors took the lead early on in the 2nd half with a cracking goal from Vincente Rodriguez but, little did we know what to follow. In fact, some 20minutes later, Ipswich had turned the game on its head with an almost identical brilliant brace (alliteration!) from Michael Chopra and a powerful far-post header from Ibrahima Sonko.
It was a great afternoon's entertainment, with all Town fans leaving the ground with big smiles and plenty to talk about.
The next opportunity for cut-price tickets is Saturday 26th November against Reading.
Posted by Karl Pearce at 19:57

Email ThisBlogThis!Share to TwitterShare to FacebookShare to Pinterest
Labels: Football