Shortly before half term, children in Blue Class took part in an activity to learn about saving water and to get an idea of just how lucky we are to have access to clean running water.

The children were divided into two teams, one representing the UK and one representing rural Ghana. Each team were given a cup and a container to fill. The UK team had a short walk to the outdoor tap to collect their water, whereas the Ghanaian team had to make their way to the back of the hideouts to collect theirs from a dirty well. They also had the slight disadvantage of a hole in their cup. 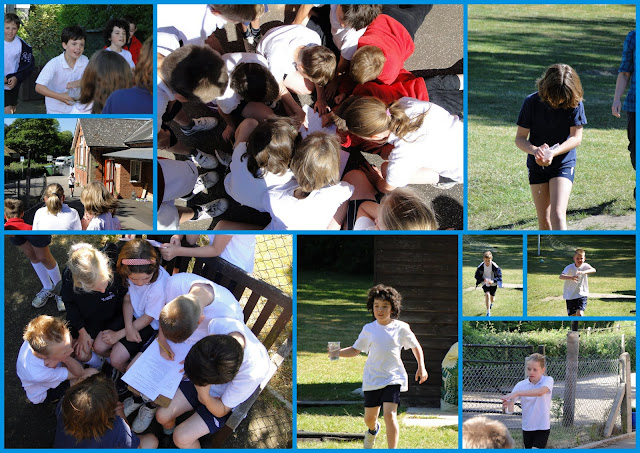 Both teams were working hard to collect their water, but the UK team soon took an early lead and could start working on a maths puzzle. This represented the improved opportunities for education in the UK compared to Ghana. Unfortunately for the Ghana team, disaster struck about five minutes into the race, when one of their team fell and broke the cup. Since resources were limited, they were forced to continue with a cracked and leaking cup, and chose to improvise using a pair of socks to try and collect water!

It was a long time before Ghana were ready to start their maths challenge, but when they finally did, they worked conscientiously and cooperated and were the first to find a solution (with a little help from Mrs Exton, who got quite excited by the problem!)

We finished the activity with a discussion about ways in which water is used in both countries and how we can reduce the amount of water we waste.
Posted by Unknown at 16:49