Mr Pearce's Perspective:
Following months in the planning, the hard work of the PTFA came to fruition on Saturday with a wonderfully well organised and superbly supported event.
Having never really camped (or 'tented' as some people referred to it as) I decided to arrive at lunchtime to piece together my recently bought 4 person tent. To say that this part of the day went like clockwork would be slightly pushing the boundaries of the truth. Needless to say, by half past four, a slightly 'wonky' tent was erect, although not necessarily near the plot which I'd chosen before hammering home the tent pegs. Maybe it was longshore drift?
The afternoon saw the arrival of many parents, laden with goods. In no time (compared to my own experience) 16 tents were erected, the barbecue was set up, salads prepared, strawberries washed, hall organised and the fridge stocked with drinks.
At 4.45pm, the barbecue roared into life expertly marshaled by men in aprons with tongs! Just a few hours later, 180 sausages and burgers had been dispensed with.
As approximately 100 guests filtered onto the field, an air of excitement and delight filled the air. Children of all ages happily played with each other whilst parents discussed topical subjects like the weather, Andy Murray's chances at Wimbledon, Ipswich Town's chances of achieving more than mid-table mediocrity and the merits of having a brewery in the village!
Later than scheduled, bingo started in the hall. The atmosphere built up into a crescendo of excitement as one by one the numbers were called in my desperate attempts at 'bingo language'. A few full houses later, the first part of the family quiz started. Quizzes are never easy to present, but the soothing effect of the children enabled it to go rather smoothly.
A short break, a run around in the fresh air, along with topping up of beverages saw the quiz re-start for the second part. Scores were incredibly tight as it went into the final round. The picture round... 20 cartoon characters from across the ages. Clearly, Clyde (from the Anthill Mob) caught everyone out. When the scores were added up for the last time 'The Dreamers' sneaked a win by one point.
A short break and re-organisation of the hall saw the first of the evening's films commence. Gulliver's Travels was well received as people tucked in to 'Eton Mess' (apart from myself as there was none left...).
By the end of the film, some of the younger ones made their way to under the canvas. Others, fuelled by hot chocolate and marshmallows, stayed for the second film, 'Gnomeo and Juliet'.
At about 11.45pm, everyone meandered off to their tents to lie back and listen to the live band playing up the road! Having never really camped before, I was amazed at how loud everything seemed. There must be a market for 'zip silencers' - maybe Mr Mansell could invent one for his next appearance on Dragon's Den?
The dawn chorus began at 4.05am. It was no good, I was cold (apparently I'd made the mistake of having my sleeping bag like a quilt rather than keeping it zipped up) and in need of a cup of tea. I was joined by a couple of young lads who looked as fresh as daisies in the kitchen for a timely brew. At half past six, I suddenly remembered that I hadn't taken any photos, so having hastily found an old camera, I set about taking a few snaps of the morning after the night before! Unfortunately, by this time the sun was shining in a clear blue sky meaning that the rather poor attempts shown below were my only pictorial record of the event. On closer inspection, it appears that, through sleepy eyes, I used a camera that may have seen better days. Or maybe, like me, it had only had one and a half hours sleep! 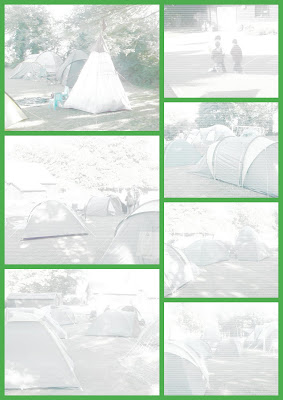 As the morning developed, more and more tent flaps were opened with a variety of facial expressions on show. The kettle was doing a sound job and by 7am the bacon was sizzling away for the filling of fresh bread rolls.
Most adults discussed how good the band at the nearby party had been, whilst others had been asleep since 8.30pm and needed waking at 9am!
So, having been refuelled by caffeine and bacon, it was time to tidy up. Again, a superb team effort saw this completed in double quick time. To be honest, the rest of Sunday was just a blur involving sleep, sleep and more sleep. However, a really great evening had been had by all and all comments were along the lines of, "we must do it again." Fortunately, it took much less time to pack the tent away that it had to put up.
It was a delight to stand back and see everyone just so happy and getting along so well. The PTFA, you are brilliant - your commitment to the school and what you do is immeasurable. On behalf of everyone who attended, thank you for an unprecedented evening's fun. Early reports indicate a profit of approximately £400.
Having seen my rather dodgy attempts, some photos have been sent in. Thank you! 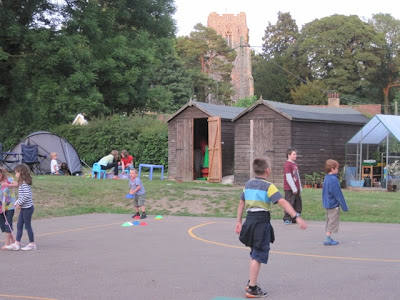 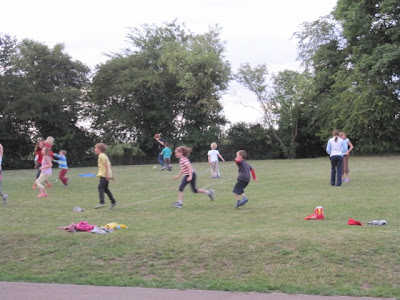 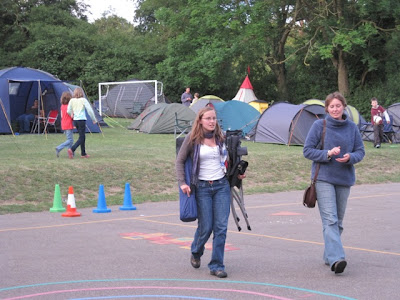 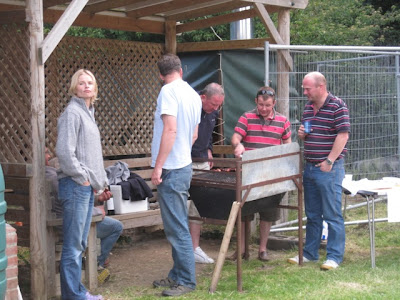 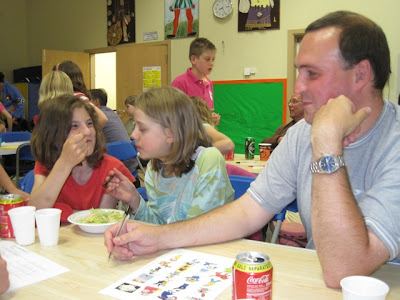 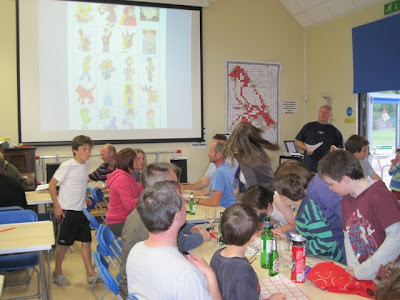