A contingent of over 30 from Earl Soham (amongst 21, 243 spectators) trekked to Portman Road, Ipswich, for a 'fun' Saturday afternoon at the football.
Having met at the Sir Bobby Robson statue, the enthusiastic hordes made their way to their seats in the South Stand upper tier. 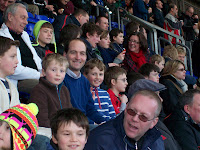 Ipswich, looking resplendent in blue and white started with a fantastic tempo and debut-making Daryl Murphy put the home side one up after just 30seconds. The players went wild (see picture below) and the fans blinked at each other in disbelief. 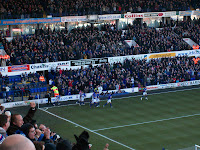 Everything seemed rosy, Ipswich were well on top, but failed to convert their early superiority into a greater lead. But, we were still enjoying ourselves! 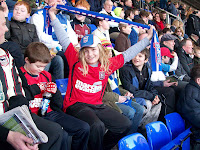 At the break, Town led 1 - 0, and people scampered off to purchase fizzy drinks, cups of tea and king size Kit Kats.

After the interval, the visitors came out looking really 'up for it'. The Ipswich goalkeeper, Arran Lee-Barratt tipped a header around the post. Unfortunately, the resulting corner was powered into the net by the impressive David Wheater to level the scores.

It wasn't until the last 5minutes that Ipswich developed greater urgency with their play, but sadly they didn't get the run of the ball and time for a winner simply ran out. 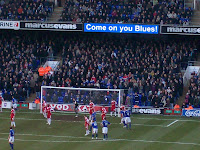 A win would have been great, but a draw was probably a fair reflection of the performances on show. The children (and adults) appeared to enjoy themselves and hopefully this is something we can repeat for the visit of Barnsley on March 20th. It was a pleasure to organise such a fantastic group of people.

As the floodlights shone through the darkness, the departing fans were left to reflect, yet again, on what might have been. 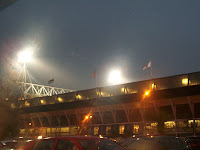