Seven children from Years 5 & 6 travelled to Stradbroke Business and Enterprise College, alongside 11 other schools, for the annual basketball tournament. 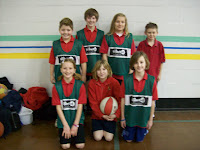 Earl Soham started strongly with a 10 - 2 victory over Thorndon. However, they were brought back down to earth with a defeat (8 - 0) to Wetheringsett. This was followed by a closely fought match against Wilby which resulted in a 2 - 2 draw. The next match was Earl Soham's performance of the day when they came back from 4 - 0 down to beat Occold 6 - 4. Tired legs were a telling factor in the last match when they were beaten 4 - 0 by Charsfield. 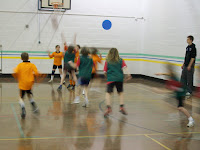 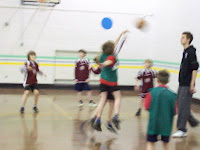 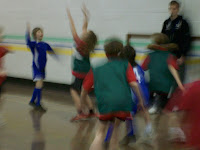 So, Earl Soham finished the tournament with the record of: Played 5, Won 2, Drew 1, Lost 2, For 18, Against 20. But, more importantly, they also finished with big smiles and the knowledge that they'd done their best in an extremely sporting manner.
Posted by Karl Pearce at 16:09