Eight Year 6 children travelled to Stradbroke for the annual small schools' unihoc tournament. There were a total of nine teams taking part.
Earl Soham started off with a 3-2 defeat against ner-neighbours (and eventual winners) Bedfield. Goals coming from Tom and Darren. This was followed by a 5 - 1 victory against Occold, with Tom scoring 4 and Arran the other. The next match against Thorndon saw Earl Soham victorious again, this time winning 4 - 1, with Tom scoring another 3 and Miriam completing the scoring.
The crunch match came next against Helmingham, and although having taken an early lead through Tom, Earl Soham were finally beaten 3 - 1. In the play-off for 5th place, opponents Dennington were defeated 2 -1, with goals from Tom and Darren.
It was a hard-fought and entertaining morning of sport, where all children involved should feel proud of their efforts. 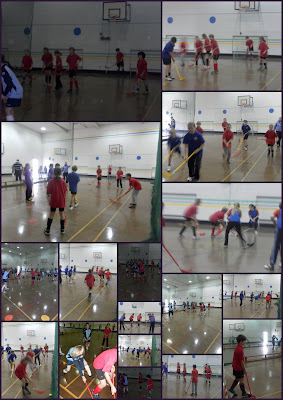