Earl Soham took to the field looking resplendent in their fantastic new kit, courtesy of the Football Foundation. 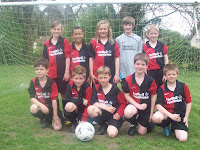 It's been a hard few years for the footballers of Earl Soham, but following many hours of hard work on the training ground a victory in a league match was finally secured at 4.24pm on Thursday 29th April 2010. Earl Soham 2 Bedfield 1.
It was a determined all-round performance from all ten of the players who thoroughly deserved their victory in a close fought, but friendly game.
Children and their families from both schools should be delighted in how well everyone conducted themselves before, during and after the game.
Posted by Karl Pearce at 19:31