There's Something Strange Happening up the Road!

The morning of Friday 26th March, 2010, was a rather strange one. The events of the previous evening had resulted in reports of sightings of strange glowing objects in the sky and unexplainable noises.

An early morning call from Mrs Elliot at Laxfield Primary School saw four intrepid investigators set off to try to work out what had actually occurred.

They were met by a host of excitable children and the local Police Officer, explaining the events. There was a strange green substance across the playground and over the field. This strangely disappeared near the drain covers. A variety of metallic object were found scattered in the the school grounds, some which looked as though they had bite marks.

Special Agents Handley, Piper-Williams and Holland-Howes (x2) took samples of the green 'goo' to investigate further at school. I look forward to reading their findings... 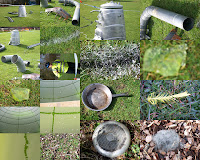