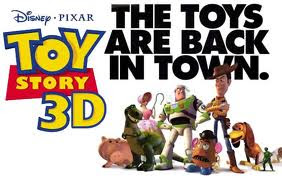 Seventy two children and a number of excited adults attended a screening of Toy Story 3 at Cineworld, Bury St. Edmunds. This was part of Film Education's schools' week, which offered free screenings to school children around the country. We were also fortunate that the PTFA funded the transport costs for everyone.
We arrived at the cinema with time to spare and settled down to what was almost a private viewing for us!
The adventures of Woody, Buzz, Jessie and co. continued with Andy (their owner) leaving home to go to college. What would happen to the toys? The highs and lows of this marvellous film were eagerly followed by all the children throughout.
The children were superbly behaved and had a great time and returned back to school in time for hot dogs and chips.