Today year 5 and 6 headed off to Thomas Mills for a fantastic cross-curricular day all about the Tudors and, in particular, the Spanish Armada.

We were joined by pupils from Dennington Primary and divided into two groups by year group. 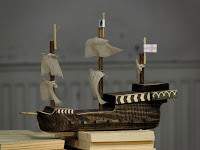 Year 5 began the day in the DT room, building a model of an Elizabethan English warship. In under two-hours, the children were able to create a superb model, using a range of tools that are not available to them at primary school.

Meanwhile, the year six pupils learnt about the Spanish Armada and how they met their downfall due to a combination of good English tactics and superior ships and weapons, mistakes on the part of the Spanish, and most importantly, the good old British weather!

This was followed by a maths session in which the children played a board game. Their aim was to successfully sail their ships (this time in role as a Spanish flotilla) from Spain to the Spanish Mainland to collect Aztec and Incan treasure for King Phillip.

After lunch the groups swapped over and completed the other activities. It was, as usual, an excellent day that all of the children (and staff) thoroughly enjoyed.